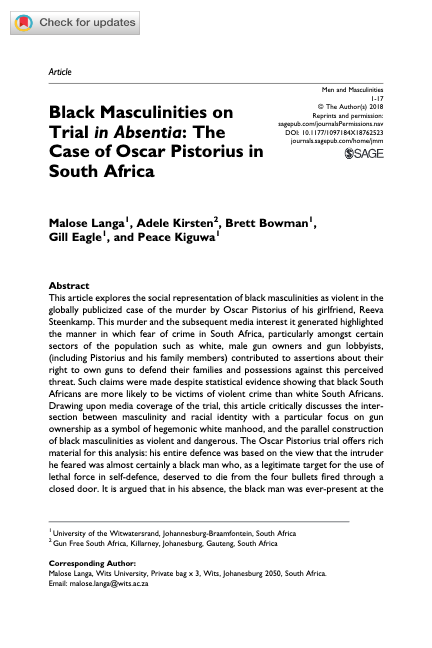 This article explores the social representation of black masculinities as violent in the globally publicized case of the murder by Oscar Pistorius of his girlfriend, Reeva Steenkamp. This murder and the subsequent media interest it generated highlighted the manner in which fear of crime in South Africa, particularly amongst certain sectors of the population such as white, male gun owners and gun lobbyists (including Pistorius and his family members) contributed to assertions about their right to own guns to defend their families and possessions against this perceived threat. Such claims were made despite statistical evidence showing that black South Africans are more likely to be victims of violent crime than white South Africans. Drawing upon media coverage of the trial, this article critically discusses the intersection between masculinity and racial identity with a particular focus on gun ownership as a symbol of hegemonic white manhood, and the parallel construction of black masculinities as violent and dangerous. The Oscar Pistorius trial offers rich material for this analysis: his entire defence was based on the view that the intruder he feared was almost certainly a black man who, as a legitimate target for the use of lethal force in self-defence, deserved to die from the four bullets fired through a closed door. It is argued that in his absence, the black man was ever-present at the Oscar Pistorius trial as a threatening figure whose calling into being was revealing of how black masculinities continue to be represented, relayed and received in particular ways in post-apartheid South Africa. 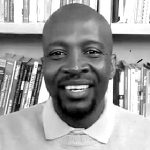