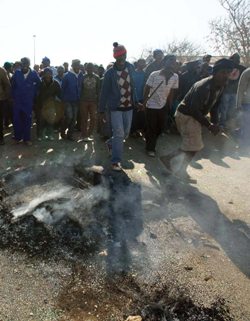 The Centre for the Study of Violence and Reconciliation (CSVR) is disturbed about the recent increase in political violence and the escalating collective violence around the country such as has been seen in the Tshwane area.

What is particularly disturbing is that the latest upsurge in violence is in response to the political representation system. While previously such violent protests have mainly been in direct response to service delivery failures, this time it is linked to the election process. Frustration about the failure of service delivery is now impacting on the legitimacy of our system of choosing political leaders.

Violence has become the currency South Africans use to enforce constitutionally entrenched human rights such as the right to vote (and democratically elect political candidates) and socioeconomic rights.

The recent violence is not unexpected. Communities were trying to have their voices heard ahead of the decisions taken this weekend. Instead of preparedness from the leadership and security sector, we have seen an escalation of violence. Once again, it is the most vulnerable who are worse impacted: poor communities, bus commuters, foreign shopkeepers, among others. This violence is an indication that people are frustrated by their exclusion from political processes.

It also points to failure of leadership to anticipate and respond to community concerns timeously and appropriately. The tendency of political leaders to only focus on condemning the violence and simply placing the blame on those directly responsible is extremely disturbing. The focus on only criminal and political opportunists shifts the attention away from the legitimate concerns of communities and feeds into the mounting anger and frustration. This simply encourages and entrenches the ability of opportunists to mobilise the masses.

We need to change the currency of engagement and go beyond the violent manifestations of people's frustration and anger to addressing the root causes beyond them. It is in paying attention to these needs that we can more sustainably prevent violence and shift the focus away from opportunistic elements. We are concerned that if this currency is not changed, it will have dire consequences for our democracy and realization of the rights that so many fought and died for. It needs to start with gaining the trust of communities and by building accountable and responsive systems of political representation.

Our political leadership, the South African Police Services (SAPS) and community leaders must take concerted action and be held accountable to ensure that frustrations do not spill over into violence that hurts our communities and the most marginalized of our society. They need to note the warning signs and deal with the deeper causes in order to prevent this kind of violence.

Key to this is the ability to listen to and appropriately respond to the needs of the communities.