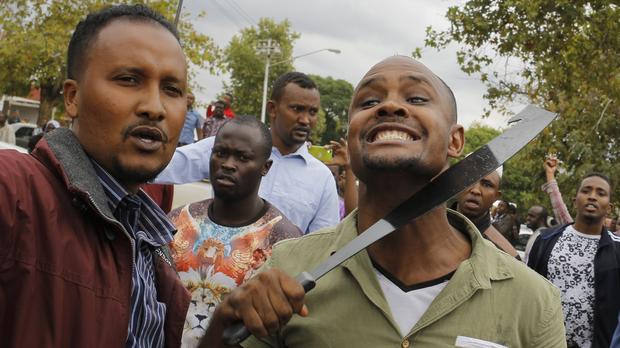 The distressing image of the necklacing of Ernesto Alfabeto Nhamuave in 2008 circulated around the world, highlighting the brutality of xenophobia in South Africa. From Pretoria and Johannesburg to Durban and Cape Town, foreign nationals were attacked, displaced and even killed.

In 2015, violence flared up again in some parts of Gauteng. This time the image of the fatal stabbing of Mozambican vendor Emmanuel Sithole by a group of armed men symbolised the senseless and reprehensible acts of intolerance.

The multiple images and news coverage depicting the attacks on migrants in South Africa have become commonplace despite continued calls for greater intervention by civil society, state and community leaders. At its core, xenophobia and its resultant violence is not a phenomenon isolated to townships and informal settlements – rather, it is the inherent othering of those who are different, and the lack of integration at all levels of society. During apartheid, labourers who were not from urban areas migrated from the Bantustans using passbooks that were issued to them under the false demarcation of these territories as autonomous. This internal migration reinforced the silos of those living elsewhere but travelling to work in urban areas.

Migrant labour to the mines across South Africa was also constituted of those who travelled from other African countries, but returned home by train every few months – never truly integrating with the South African labour force. Similarly, black South Africans physically and psychologically traversed a landscape of othering where they entered suburbs with their passbooks, as if tourists in their own country. Experiencing their value as inherently linked to the undervalued labour they provided, they would also return back to their communities to experience the alienation and dehumanisation of the apartheid system.

South Africa is characterised by structural and physical violence that results from the creation of "others" – where identity, poverty, inequality and labour intersect.

A 2008 study by the Centre for the Study of Violence and Reconciliation concluded that the xenophobic violence in informal settlements could be traced to the high levels of poverty and unemployment within these communities. Structural inequalities and socio-economic challenges contributed to the perception that foreign nationals were either unduly benefiting from state resources or directly contributed to violent crime in communities.

For instance, foreign nationals have been accused of fraudulently obtaining RDP houses, yet there have been no formal enquiries into this. Another assumption is that foreign nationals are able to establish and operate small businesses through some form of corruption. Providing communities with accurate information is imperative in preventing the escalation of violence.

But there is also a responsibility on community leaders – including civil society, local councillors and police officials – to be responsive to grievances at the onset, so as not to aggravate local actors into violence. Where government agencies, such as hospitals and police stations, engage in dehumanising ways with foreign nationals, they replicate institutional xenophobia that reinforces the attitudes in communities. Sometimes, government officials and political leaders are the very actors driving xenophobia in various public spaces with the rhetoric they use during crowd gatherings.

Politicians need to take greater responsibility for their xenophobic utterances that can be construed to contribute to violence. Also, there needs to be greater allocation of policing and other resources to the communities that experience the highest levels of crime and socio-economic deprivation.

Implementation of these resources must be accountable and responsive. Alleviating the legitimate anger of citizens through responsive government is key.

Moreover, there is a need for better policies regarding integration of foreign nationals into communities. We need to ensure that the communities they occupy understand their contexts, and social provisions are made to facilitate integration.

Furthermore, state actors must be continuously capacitated to be reflective and responsive to the needs of foreign nationals.

Short-term priority strategies to address xenophobia include establishing early warning systems in communities with a high likelihood of xenophobic violence. This would require teams of respected community leaders assembled and trained in mediating conflict with clear lines of communication with local police, political parties and other organisations. Until now, the government's response is mainly reactive, rather than proactive, in dealing with xenophobia.

Lastly, xenophobic attitudes are passed down to the younger generation – it is important that the school curriculum at all levels includes an understanding not just of apartheid and its impact, but of African history, colonisation and the role of fellow African countries lending support to the liberation struggle against apartheid, often at great cost to themselves.

Modiegi Merafe is a community practitioner, Masana Ndinga-Kanga is a research manager and Richard Chelin is a researcher at the Centre for the Study of Violence and Reconciliation. 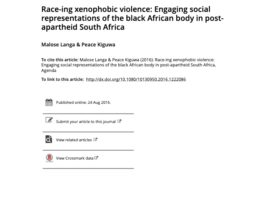 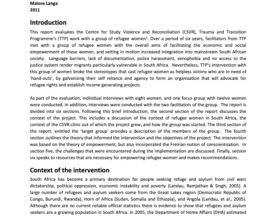 Women Empowerment: A Case Study of a Refugee Women's Group at the Centre for the Study of Violence and Reconciliation (Appendix E) 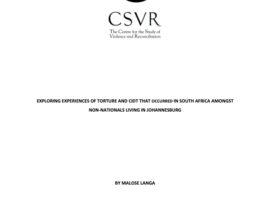 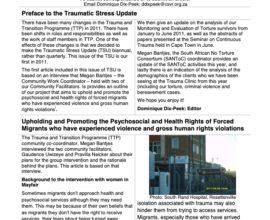