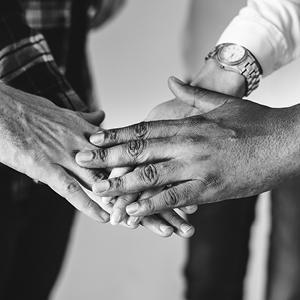 Early proponents of democracy firmly believed that women, like lunatics, servants, slaves and children needed neither the vote nor representation on governance structures. Not only were they convinced that women's interests could be safely subsumed under those of male family members, but they were also quick to argue that women's fragile, emotional natures rendered them incapable of moral reasoning, delivery of justice or governance of people.

So South Africa's deputy president, and substantial number of female ministers, premiers and parliamentarians are a welcome reminder of how far we have moved away from such assumptions. However, the purpose of placing women in positions of power and responsibility is not merely to rebut baseless stereotypes (which are not as archaic as we'd like to think) but to work towards the greater end of transforming unequal power relations between men and women. Is our significant number of women holding political office achieving this.

Continuing violence against women is one example of how the presence of women in parliament and cabinet, even in significant numbers, does not necessarily translate into women exercising substantive political influence.

The Domestic Violence Act (DVA) was passed in 1998 when, comparatively speaking, we had the fewest female ministers and women in parliament post-1994. Legislation introducing minimum sentences for rape and tightening bail legislation for rape accuseds was enacted in 1997 and guidelines for the handling of sexual offences in 1998. The first specialist sexual offences court was established in 1993 already and the family courts in 1996.

Policy and legislative change has slowed to a trickle since the 1999 elections – and not because we have run out of legislation to reform. The Sexual Offences Bill, for instance, has been languishing about in one form or another since 1998 when the South African Law Reform Commission was tasked with the reform of sexual offences law. The Commission's draft Bill was submitted to cabinet in 2002, which revised its content and then sent it to parliament. Still not finalised before the 2004 elections, the draft bill appears to have dropped completely off the parliamentary agenda since then.

In the meantime, members of the 'untransformed' judiciary are, ironically, moving considerably faster than the Department of Justice and parliament to rectify the prejudicial nature of current sexual offences legislation and its implementation.

Two decisions this year, one in the Pretoria High Court and the other in the Nelspruit Regional Court, challenged the discriminatory nature of the current definition of rape. Other decisions such as Carmichele v Minister of Safety and Security and Van Eeden v Minister of Safety and Security have established a constitutional duty on the police and courts to take reasonable steps to protect women from sexual offenders. These cases place state accountability to women at the centre of their decisions. They are also examples of how decision-makers who may be 'unrepresentative' can nonetheless still use their power to enhance and uphold women's rights.

Parliament has been considerably less successful than the courts in holding the state to account for its performance in implementing women's rights. The DVA places a statutory obligation upon both the Independent Complaints Directorate (ICD) and the police to report every six months to parliament on the number of complaints received around the police's non-compliance with the Act. The ICD has submitted two reports since 1999 and the police none.

Putting more women in parliament has not resulted in better resourcing of initiatives promoting gender equality either. The Women's Budget, implemented in 1995, is now but a dim memory.

So what might be some of the reasons as to why increasing the number of women in positions of political power has not had the desired transformatory effect? First, the biological fact of being female does not necessarily produce in all women a political awareness of gender oppression, nor the desire to do anything to alter the conditions of inequality which women are subject to.

We also forget that women holding political office are first and foremost accountable to their parties – and not women generally. Women also have a diverse and heterogenous range of interests, not all of which can be adequately represented by having some women in parliament.

Thus to capture the diversity of these interests, it is essential to open up parliamentary processes far more than is currently the case to allow for the greater participation of women and organisations outside of parliament.

In conclusion, the goal is not only to put equal numbers of men and women in Parliament and Cabinet or have a female president. This merely benefits the individual women concerned and is the absolute minimum women should demand of a democratic state.

More importantly, it is about shifting the debate from one focusing on representation to transformation. Arguably then we are exchanging the goal of transforming relations between men and women to one which simply attempts to put some women in positions of power – and without the necessary influence to effect change.