King, A. (1994). Monitoring the Elections in South Africa. Paper presented at the Centre for the Study of Violence and Reconciliation, Seminar No. 1, 26 January.

Angela King was Chief of Mission of the United Nations Observer Mission to South Africa.

Venue: Centre for the Study of Violence and Reconciliation, Johannesburg, South Africa

On the 26 January 1994, Angela E. V. King, Chief of Mission for UNOMSA (United Nations Observer Mission to South Africa), presented a paper at a Centre for the Study of Violence and Reconciliation seminar. King gave an overview of how the UN perceived the context in which the South African elections were being run in, and what logistics they faced. The following is an edited version of King's paper.

It is well known that in countries other than those with a long tradition of democracy and periodic elections, the conduct of free and fair elections has posed an immense challenge. South Africa is proving to be no exception. In terms of physical infrastructure, South Africa is more advanced than many other countries; nonetheless, the creation of a neutral and tolerant political atmosphere conducive to a democratic election is a difficult proposition.

Based on UNOMSA's field of observations, we believe that the priority issue to be addressed from now through the elections is the relationship between the police, communities and political parties. The country cannot afford a further escalation of violence.

It is our assessment that the breeding grounds for the violence are a culture of intolerance, and a political tradition notable for its non-democratic character. Apartheid and its predecessor structures are responsible for a 300 year evolution away from democracy and mutual understanding, and the effects are pervasive. At this time it would have to be said that the sporadic and seemingly uncontrollable outbreaks of violence of the sort seen most frequently in Natal and the East Rand are the most destabilising manifestations of the problem.

A key component of this phenomenon is the inability or unwillingness of the security forces to contain this violence or apprehend the perpetrators. A vicious cycle can arise whereby allegations of security force involvement in the violence fuel the existing mistrust of the police and Defence Force, and the continued failure of the police to address the violence fuel allegations of security force involvement. In turn, township residents are often extremely reluctant to co-operate with the police, a consequence of the historical role played by the police and military in enforcing apartheid. There is also a greater incidence of attacks on police. In 1993, 205 policemen were killed, an increase of 75 over 1992. Unfortunately, security forces frequently respond to this situation with retaliation.

The place where the culture of intolerance has its greatest impact is political party rivalry. South Africa is not country where campaigning can be seen as the benign exercise of a democratic right to freedom of speech. For years, various oppressed groups have been set against one another to scramble for pitifully limited resources, while the privileged white minority was accorded the numerous benefits and advantages that this country is capable of providing. There is also considerable fear underlying the antagonism, compounding the intolerance. In the current climate it can be expected that intimidation of voters on their way to or from the voting booth is a very real possibility.

One source of intimidation is the marginalised black youth, deprived of an education, who are not accountable to adult authority and have become desensitised to violence and even death. Many of these young people have no outlet for their frustration and rage, and are overlooked by political leadership. Unless there is an effort made to connect to the youth, with structures implemented to provide constructive channels for their energy, these young people, ready fodder for agents of disruption, will play an obstructing role in both the election and rebuilding processes.

Finally, the ready availability of licensed and unlicensed weapons, and their display at marches and public meetings cannot be overemphasised as an obstacle to free and fair elections. There is an alarming failure to control the inflow and distribution of illegal weapons in black communities, and a disheartening ease in obtaining licenses for the legal purchase of firearms by the white community. The contribution made by firearms and cultural weapons' to the mentality that violence and intimidation are acceptable is incalculable. Time and again the international observer missions in South Africa have urged the Government to implement and improve existing legislation against the public display of dangerous weapons.

Although problems of violence and intimidation tend to overshadow more seemingly mundane concerns, the potential hindrance to free and fair elections presented by logistical difficulties should not be underestimated. In the coming three months, the IEC will have to formulate and finalise the electoral plan, establish and staff its national and regional structures, recruit and train its election officials, choose voting sites, ensure registration and education of voters, and monitor compliance by all concerned with the provisions of the Electoral Act. The IEC must also ensure transparency and fairness in the appointments of electoral officials at all levels.

Of paramount concern is voter education. Experience in Namibia and Cambodia has shown that probably the singularly most significant obstacle to a free and fair election on an individual level is the voters' fear that the opposition will find out who they voted for. The second problem posed by an adult population that has never voted before is that the majority of voters are not familiar with casting a ballot. While it can be assumed that union members are accustomed to voting procedures, even this group is unlikely to be conversant with the particulars of this election.

The number and location of voting sites are yet another key component of free and fair elections. If voting stations in rural areas are inaccessible, bearing in mind obstacles posed by distances and lack of transport, the fact that a voter has learned how to cast her ballot will be of no consequence. Similarly, if voting stations in urban areas are too few in number, it will be physically impossible to accommodate all those who are eligible to vote in the time allotted. Currently, the IEC is projecting the establishment of approximately 9 000 voting stations, to accommodate 22 million potential voters. It is worth noting that in the recent elections in Cambodia, there were 1 600 voting stations for 4.2 million voters, voting everyday over a five day period. Half of the electorate cast their ballot on the first day, thus the ratio of voters to voting stations on the busiest day was an average 1375:1. A comparable average in the last election in Spain was 656:1. Based on the above projection, each of the polling stations in South Africa will have to accommodate an average 2 500 voters over two days, with the majority turning out to vote on the first day. With these numbers, it will be essential that each station functions smoothly. Any malfunction could result in hundreds of people being excluded when polls close at the end of the day.

Finally, the obstacle posed by Bophuthatswana and KwaZulu authorities to access to voter documentation or participation by residents in the election is enough in and of itself to give rise to serious concern.

In looking to the future of South Africa with a democratically elected government, UNOMSA is optimistic. South Africans have been engaged in an exemplary, though often painful and difficult process of negotiation and reconciliation for three years. The lessons are not happening in a vacuum but as the culmination of these years of effort. It is this experience that is going to make the greatest contribution to positive social and economic growth after 27 April. While it would be foolhardy to paint a picture of spontaneous harmony and understanding upon the installation of the Government of National Unity, UN observations both here and abroad strongly suggest that these elections will be a major step forward on the path to national reconciliation.

Specifically, for example, the elections provide an important opportunity for the security forces to rehabilitate themselves in the eyes of the general public; having heretofore been seen as the main enforcers of apartheid, they can prove, by safeguarding the electoral process, that they are now on the side of democracy and for the new South Africa. Similarly, as the 1992 referendum, in which the majority of white voters supported the movement toward a non-racial democracy, cleared the path to negotiations, the fact that the whites-only government has indeed facilitated its own demise will promote reconciliation between the races. Finally, socio-economic reconstruction that will be possible when the majority of the population is represented in government structures will make a huge contribution to the reduction of bitterness, criminality and violence.

This election is critical. It stands to make the difference between an immediate future of progress, notwithstanding inevitable setbacks, and another Angola. What is happening here is quite momentous. If the process works in South Africa, as the international community certainly expects it to, it will be an example not only to areas of conflict in Africa but to other parts of the world, like Bosnia, and will give South Africans a sense of collective worth. South Africa needs a success. The world needs a success. And we are extremely positive we will have a success. 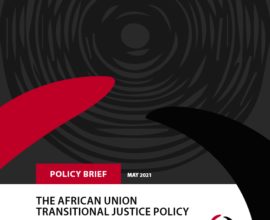 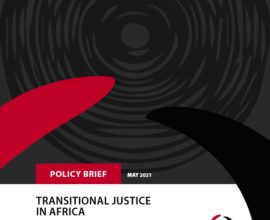 Transitional Justice in Africa: What's Human Rights Got to Do with It? 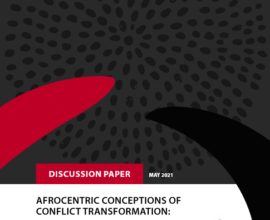 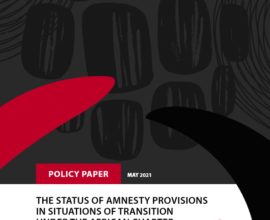 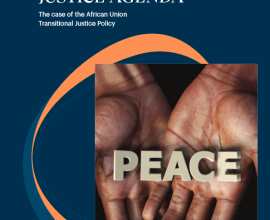 Locating Peace within the Justice Agenda: The Case of the African Union Transitional Justice Policy