'He may be fucking his cellmate every night' but if you ask him: 'Have you had a homosexual experience in prison?' he will truthfully, as far as he is concerned answer, NO'. This is a warning that Stephen Donaldson, a Stop Prison Rape activist, once gave researchers of prison sex.

Sexual practices among male prisoners show that sex acts in themselves are not automatically equated with one or another sexual identity. For this reason people working towards better understandings of diverse sexualities and the promotion of safer sex practices are increasingly replacing the use of the terms 'homosexuality' or 'gay' with the phrase 'men who have sex with men'.

In men's prisons we find a situation that can seem contradictory: a subculture that supports probably the greatest concentration of male on male sex in the country is at the same time virulently homophobic. In fact the workings of sex in prison lay bare ideas of gender and sexuality that have a repressive grip on society in general.

Patriarchy and misogyny are rife. Because women aren't available to service men and a particular notion of masculinity (as defined by power and domination) 'women' are 'created'. Part of the horror of being raped or coerced into unwanted sex in prison is that such an event is understood to destroy men's claim to 'manhood' and to turn them into 'women'. And 'women' are not worth very much. In dominant prison culture forced sexual penetration casts on those who are penetrated a detested 'woman' identity. 'Women' are regarded and treated as sex-objects and domestic servants. Prison 'marriages' between 'men' (husbands) and 'women' (wives) are usually brought about by an initial forced sex act. A range of sophisticated techniques – not only blatant rape – can be used to trick or manipulate people into a first event of sexual subordination.

In prison marriage relationships 'men' are active, they do 'business' in prison and provide materially for their 'wives'. They are the penetrators in sex. Women must be passive, sexually and otherwise. These are the rules governing the 'accepted' and most common sexual relationship and type of sex in prison, and that are endorsed and entrenched by prison gangs and inmate culture more generally. Not all marriages will unfold like this and not all sex occurs within marriages, but protagonists who negotiate other ways of relating best keep it secret or incur the wrath of the powers of dominant inmate culture.

To have the 'wrong' kind of sex or to have sex with the 'wrong' kind of person is punishable. Ushintsha ipondo (literally meaning to exchange a pound) is marked by mutual agreement and is apparently quite common, especially among younger prisoners – who are often other men's 'wives' too. They agree to take it in turns to penetrate or 'play the man' and to receive. But this consensual sex is considered deviant because it is associated with 'homosexuality'. It's even more scandalous for an older 'man' to be involved. 'It's a serious matter!' if you're caught doing it explains Piet, who spent most of his life behind bars. 'It's like being a big man in a house where everything is under your control … and my wife hears that I've done homosexuality with another man. It would shock her! It's just like that if I get a man of my age and I do ushintsha ipondo with him. If the gangs hear about this – Ay!!' Ushintsha ipondo disrupts the process that allocates 'manhood' on the basis of penetration and power and interferes with the heterosexually oriented environment that is the preserve of the gangs.

The gangs and dominant inmate culture police sex in prison with a remorseless homophobia. For this reason ushintsha ipondo is outlawed. At the same time, experiences of violence and humiliation in power-defined interactions breed and intensify phobic attitudes. Part of this is a tendency among some to conflate notions of 'homosexuality' with forced sex. Witnessing or experiencing prison sex and sexual abuse is some people's first encounter with male on male sex. It is not surprising that in such a context, notions of 'homosexuality' or 'gayness' can become confused with sexual coercion. For some people prison encounters constitute the yardstick for understanding sex and sexual relationships between 'men'. And these encounters seem more often than not to be primarily defined by coercion, 'Gays' are people who 'make' you sleep with them 'when you don't know what's going on' says one young offender. Others talk about 'victims' of homosexuality and being afraid of 'homosexuality' when it is clear that what they are afraid of is being forced into sex.

Same sex activity in many subcultures reenact heterosexual gender roles and the accompanying ways of relating: deviations from these are frowned upon. So the fact that prison 'marriages between men and women' are supported while 'homosexuals' are punished conforms to this pattern. But the extent of the coercive and repressive power that is so central to the accepted marriage-style sex in prison reminds us more of the heterosexual relations they imitate than same sex activity in other subcultures. We're consistently reminded of how what goes on inside is connected to the rest of us. 'In fact, those things that are done by women, you must do them' says Jabu when we're talking about how 'wives' must behave: 'If your husband wants tea, you must go and make tea. If he wants his washing done, you must do it.' On the sex requirement, another remarks, 'It's my duty as a wife, every night to give him whatever he wants … It's just like a woman outside'. Not so weird, perverse and fundamentally 'other' after all.

Prisoners are not in the business of creating from scratch a whole new society, but rather in drawing on and adapting identities and ways of relating that they bring with them from outside. Intervening in these processes can help stem the flow to the outside when prisoners are released, of these intensified and adapted social prejudices, and the harm they cause. We outside have a lot of work to do on the way we relate to each other too.

Sasha Gear is a Researcher at the Centre for the Study of Violence & Reconciliation. This article is based on the study entitled, 'Daai Ding: Sex, Sexual Violence and Coercion in Men's Prisons'. 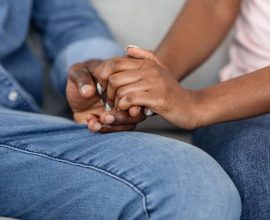 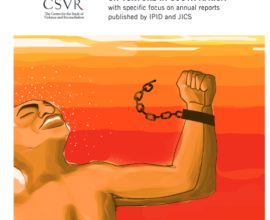 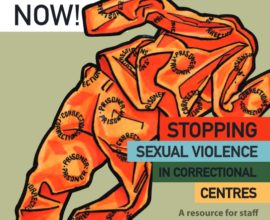 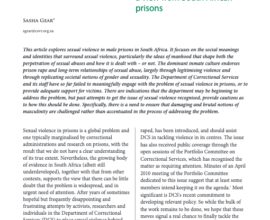 Recommendations for the Promotion of the Sexual Health, Sexual Rights, Safety and Dignity of Prisoners