In South Africa, research on violence against women has not been accompanied by explanations of how the various figures were arrived at. It is therefore impossible to evaluate the accuracy of rape and domestic violence statistics. Recently undertaken "victim surveys" were intended to provide a clearer and more accurate picture of crime in general. However, Lisa Vetten argues that the policies and crime prevention strategies emerging from these studies have the potential to entrench marginalisation of gender violence from crime prevention initiatives.

Considered crucial to the control and prevention of crime, victim surveys have proliferated over the last couple of years.1 But do these studies adequately take gender into account in terms of their methodology, analysis and writing up? This short article explores the question by evaluating two recent victim surveys, one conducted within the municipal boundaries of the Johannesburg Transitional Metropolitan Council, and the other nationally.

Estimates of rates of violence against women are powerful but unsubstantiated. Society treats men and women differently, and as a result they have different experiences, including experiences of violence. For example, women are far more likely to be the victims of domestic violence, sexual assault and particular kinds of murder (such as sexual serial killing) than men. Wives are much more likely to be killed by their husbands, than vice versa. Women who have experienced domestic violence and sexual assault are also more than likely victims of other crimes to be blamed for their victimisation (Morris, 1987) and as a result these crimes remain hidden. That is, if they are recognised as crimes at all. So widespread is violence against women in South Africa that it has been described as endemic to the country. (Vogelman and Eagle, 1991) Yet it is seldom reported to the police. (Women's Health Project, 1995; NICRO, 1993)

Varying estimates exist about the proportion of reported rapes to their actual occurrence. The National Institute for Crime Prevention and Reintegration of Offenders (NICRO) estimates that in South Africa only one in 20 rapes is ever reported to the police and thus extrapolates that a rape occurs every 83 seconds here.2 If this estimate is accurate, then at least a million women were raped during 1996. The South African Police Service (SAPS) estimates are even more staggering. They claim that only one in 36 rapes is reported, suggesting that a rape occurs every 35 seconds. (Women's Health Project, 1995)

No figures exist for the number of cases of domestic violence reported to the police, for the simple reason that there is no such crime as "domestic violence". Incidents of domestic violence are literally hidden among all the cases of common assault, attempted murder, or pointing a firearm (to name just a few of the charges which may include cases of domestic violence). As with rape, various estimates on the incidence of domestic violence have been made. At a 1984 symposium on battered women it was estimated that up to 60 per cent of marital relationships involve abuse. (Motsei, 1993) A study conducted in Mitchell's Plain in the Western Cape found that 25 per cent of social workers' cases were related to domestic violence, while the SAPS in the same area reported that wife assault accounted for more than 15 per cent of crime in 1981 and 1982. (Motsei, 1993) Human Rights Watch (1995) cites the following figures from a range of sources: Rape Crisis estimates that one in every three women is assaulted by her male partner; the Women's Bureau estimates it at one in four. The Advice Desk for Abused Women suggests that one in six women is regularly assaulted by her male partner (as does Co-ordinated Action for Battered Women and People Opposing Women Abuse), and that at least one in four women is forced to flee a life-threatening situation in her home at some point in her life.

But none of the bodies providing these estimates has ever produced any explanation as to how they reached their figures, so it is impossible to evaluate their accuracy. This is where victim surveys may be valuable.

The potential of victim surveys

The strengths of victim surveys are thought to lie in the kind of information they provide, such as:

But the likelihood of victim surveys providing this information about violence against women depends entirely on the amount of attention researchers pay to gender when they design, carry out and report on their studies.

Sexism in research may take the following forms: (Eichler, 1988)

The lack of attention to gender can be observed throughout the research process, from the choice of subjects and the data collection process, through to the interpretation of results and the reporting of research findings. (Lupton et al, 1992)

To illustrate these points, consider the Johannesburg victim survey conducted by the Institute of Security Studies, (Louw et al, 1998) and the national survey carried out by Statistics South Africa. (Stats SA, 1998) Conducted in July 1997, the Institute of Security Studies (ISS) study consisted of street surveys carried out in different communities within the Johannesburg Transitional Metropolitan Council's area. Findings were fed into council initiatives to prevent crime. Stats SA was commissioned by the Department of Safety and Security to conduct a country-wide, household-based victims of crime survey. Information was drawn from a sample of 4000 people over the age of 16. Among others, findings on the nature, extent and patterning of crime from the victims' perspective are to be channelled into the National Crime Prevention Strategy.

The gender of the researcher is known to affect fieldwork in a number of ways. (Lupton et al, 1992) For instance, whether the researcher is male or female affects the way he or she relates to the people being researched and vice versa. The depth of rapport between researcher and informant will affect the quality of the research. The researcher's attempts to elicit information may also be constrained by what are considered appropriate gender roles. For example, it is not always considered seemly for women to question men on particular subjects (or observe them in particular activities), or for women to know particular things. And the reverse is also true.

This point is noted in both studies, with the ISS discovering during its pilot study that only men could effectively interview men while women interviewers were equally effective with both men and women. Stats SA set the ratio of male to female interviewers at 1:3 in order to reduce the chance of a female respondent being approached by a male interviewer. Stats SA also found that some male heads of households in traditional rural settings refused to allow anyone other than themselves to be interviewed for the study.

But although both agencies went to some trouble to address the problem, they appear to have evaded the more serious question, which is whether or not surveys are suited at all to capturing women's experiences of violence. Louw et al note that "[v]ictims' responses to the surveys are affected by… their reluctance to discuss their experiences, particularly in the case of sexual crimes and domestic violence". (1998:9) The Stats SA report makes a similar observation, suggesting that victims' reticence to discuss sexual assault and domestic violence may lead to an under-counting of these crimes in victim surveys. Compounding the problem in the ISS survey, is the failure even to ask about domestic violence.

Before fieldwork began then, a gender bias was introduced into both studies as a result of their choice of research method, as well as in the questions they chose to ask. If this bias is to be avoided, surveys should either not be used at all, or be supplemented with other data-gathering techniques more likely to capture women's experiences of victimisation. The ISS in conjunction with the Centre for the Study of Violence and Reconciliation and the University of Cape Town has embarked on such research.3

Analysing the research and reporting the findings

With the exception of sexual assaults, men emerge as the majority of victims of crime in both studies and when the studies refer to "victims" they are implicitly referring to male victims. While studies of male victimisation are certainly worthwhile, they cannot be understood as the paradigmatic experience of victimisation. Gender-neutral terms such as "individuals" and "persons" in studies such as these are out of place if it is male victims they are referring to.

The use of gender-neutral language becomes ridiculous in at least one instance in the Stats SA survey. In presenting findings on the relationship between victim and perpetrator in cases of assault and sexual offences, categories such as "spouse/partner" and "boy/girlfriend" have been created. The use of these terms suggests that wives (who become "spouse/partner") or girlfriends (who become "boy/girlfriend") commit assaults and sexual violence at a rate at least equivalent to that of husbands or boyfriends. Theoretically possible though this may be, it is not probable, and defies much other research on gender violence.4

Such findings are likely to have resulted from poor questionnaire design (such as creating one tickbox combining the terms "boy/girlfriend"), or a failure to disaggregate the data.

A further problem with both studies is their use of gender as a variable in isolation from other variables, rather than in combination with them (this approach is hardly unique to these studies, however). This has the bizarre effect of one's gender disappearing on membership of a "race", age or income group). Because women are not an homogeneous group, being different in terms of age, education, income group and skin colour (to name just a few differences), their experiences are also not identical and the design and reporting of research needs to capture this complexity.

Neither of these important studies has been designed or written in a way that adequately incorporates gender, suggesting that many of the aims of these two victim surveys had not been met. The ISS is attempting to address the shortcomings of its survey with a follow-up survey on women's experiences of gender, and by incorporating information on the relationship between gender and violence in their report. The Stats SA survey, by not doing the same, may even distort understandings of violence against women.

Policies and crime prevention strategies emerging from these studies are likely to continue marginalising violence against women if they focus resources and energy entirely on crimes committed by strangers in public places, when in fact women are typically the victims of crimes committed in the home and by men that they know.

2 In 1993 NICRO produced a video entitled Every 83 seconds where they put forward this estimate.

3 The fit between research methods, methodologies and epistemologies, and women and men's experiences is the subject of ongoing debates beyond the scope of this article. See for example Epstein, 1988; Stanley, 1990; Longino, 1993; Alcoff and Potter, 1993.

Longino, H. (1993) 'Subjects, power and knowledge: Description and prescription in feminist philosophies of science'. In Alcoff and Potter (1993).

Women's Health Project (1995) Health in our hands: Proceedings and policies of the 1994 Women's Health Conference. Johannesburg: Centre for Health Policy, University of the Witwatersrand.

© Centre for the Study of Violence and Reconciliation 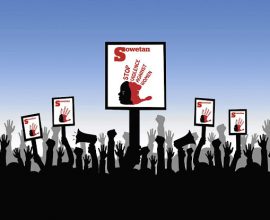